CPS workers in a number of hospitals established unit committees and publications in the hopes of organizing improvements and promoting a better understanding of mental illness both amongst themselves and the greater public. The most successful of these efforts took form as the Mental Hygiene Program (MHP), which was first established out of the Philadelphia State Hospital and eventually grew into a detached service unit (#34.3).

Harold Barton, Leonard Edelstein, Philip Steer, and Willard Hetzel took the lead in shaping the purpose and structure of the MHP. This program played a crucial role in coordinating attempts at reform across the units as well as providing training information through regular publications such as The Attendant. The MHP also encouraged individual units’ public information efforts, such as publishing the Forgotten Children pamphlet compiled at Vineland Training School. 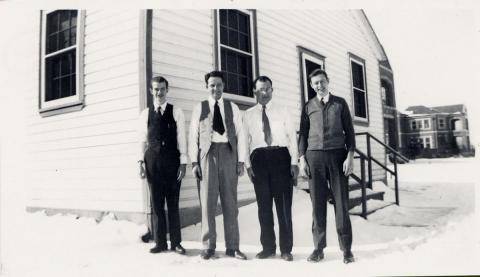 The postwar years witnessed increasing national awareness of the mental health movement, with various exposés drawing widespread attention to deplorable conditions and well-known figures such as Eleanor Roosevelt recognizing the need for reform. The federal government responded with the Mental Health Act in 1946 which, though neither an immediate nor a comprehensive solution, nevertheless laid groundwork for increased funding towards research, training, and institutional development.

In that same year the MHP assumed a new identity as the National Mental Health Foundation (NMHF) to expand upon the efforts begun in the CPS units. The NMHF maintained an extensive array of publications, including The Attendant which was rebranded as The Psychiatric Aide. Using thousands of eyewitness accounts the MHP had collected from CPS hospital workers, the foundation also published a compilation titled Out of Sight, Out of Mind which earned particular praise from Mrs. Roosevelt in her newspaper column “My Day.”

The foundation further worked to organize public information campaigns such as the first National Mental Health Week, which was accomplished in cooperation with the Junior Chamber of Commerce in 1949. As part of this event, the NMHF also partnered with the American Newspaper Publishers Association, with the intent of encouraging greater public sympathy toward mental health. The Association successfully appealed to newspaper editors across the country asking them to adopt less stigmatizing terms such as the use of “patient” in place of “inmate” or “mental illness” in place of “insanity or lunacy.”

In a similar vein, the NMHF created the Psychiatric Aide of the Year award to give the mental health profession a much-needed boost in prestige. The NMHF additionally collaborated with the Menninger Foundation during the process of developing a training school for psychiatric aides at Topeka State Hospital, which opened in 1949.

Sareyan, Alex. The Turning Point: How Persons of Conscience Brought About Major Change in the Care of America’s Mentally Ill. Scottdale: Herald Press, 1994.