Towards the end of World War II, efforts to rebuild and rehabilitate Europe began. In November, 1943, a conference of 44 nations created the United Nations Relief and Rehabilitation Administration (UNRRA) in order to "provide economic assistance to European nations after World War II and to repatriate and assist the refugees who would come under Allied control." ("United Nations Relief and Rehabilitation Administration")

At the same time, organizing was underway to ship heifers to poor countries. This idea came from Dan West while he was serving as a relief worker with the Church of the Brethren in Spain during the Spanish Civil War. The American Friends Service Committee spearheaded the initiative to create a relief program in Spain and the three Historic Peace Churches (Brethren, Mennonite, and Society of Friends) came together for the project. Dan was asked by the Church of the Brethren to join the project for five months from September of 1937 to January of 1938. While doling out powdered milk to the refugees, Dan was forced to decide which children would receive the powdered milk rations and which wouldn’t depending on how quickly they were gaining weight: the children’s lives were literally in his hands. He realized that greater and more beneficial use would come from providing a cow to those in need rather than limited rations of milk: “a cow, not a cup.” (Passing on the Gift; “Our History”; Kreider, p. 8)

Dan took this idea back to the United States and discussed it with friends, neighbors, farmers, and fellow Brethren. A professor of agriculture suggested to Dan to send heifers instead of cows who were already giving milk since the trip would be too hard on the cows. Furthermore, sending pregnant heifers would allow the recipients to "pass on the gift" of the first female offspring to another family (an idea which has formed into a fundamental principle of the Heifer Project today). In June of 1942, the Brethren Men's Work of Northern Indiana created the first "Heifers for Relief Committee". Then in January of 1943 the Brethren Service Committee (BSC) took on the Heifers for Relief Committee and renamed it Heifer Project Committee. Dan's original dream of sending cows to Spain was temporarily halted due to World War II, so the first heifers were sent to Puerto Rico on July 14, 1994. Finally, once the end of the war in Europe came about in 1945, shipping the heifers overseas to Europe became possible. (Miller, p. 1; Kreider, p. 132)

The Brethren Service Committee and the United Nations Relief and Rehabilitation Administration joined forces to make this idea possible. The Brethren Service Committee supplied attendants to look after the livestock on the seas while the UNRRA provided the ships. Finally, on June 24, 1945, with the end of the war in Europe, the first shipment to Europe went to Greece. Between June of 1945 and the early months of 1947, the partnership between BSC and UNRRA allowed for nearly 7,000 "seagoing cowboys" (as the attendants on the ships were called) to deliver over 300,000 animals including horses, heifers, and chicks. (Miller, pp. 2-7)

Three hundred and sixty-six of the cowboys were men who had participated in Civilian Public Service camps during the war. When the Heifer Project was first formed, the Brethren Service Committee requested that a CPS worker serve as an administrator. Selective Service approved this and in the summer of 1943 Marvin Senger was transferred to Nappanee, Indiana, to fill the position. Men from CPS camps were thought to be natural selections for the manpower needed for the shipments. The creation of the CPS Reserve Corps allowed for the CPSers to participate in the seagoing cowboys as part of their CPS assignment. Certain requirements were made to determine eligibility for the CPS workers as described in this bulletin:

"Men to be eligible must have been assigned to CPS on or before October 31, 1944, and have served continuously therein since that date. Men who have had 18 months service in CPS as of this date are thus eligible to apply for transfer to the Civilian Public Service Reserve.... [E]ach applicant [must] include in his letter of request to Colonel Kosch a statement of willingness to make at least one trip prior to discharge from the Reserve."

The camp for the seagoing cowboys is listed as Camp #152 in the database. Although it is not considered officially a part of CPS, the men were not discharged from CPS until after they returned and thus it became a part of their overall CPS experience.  (Yoder, p.1) 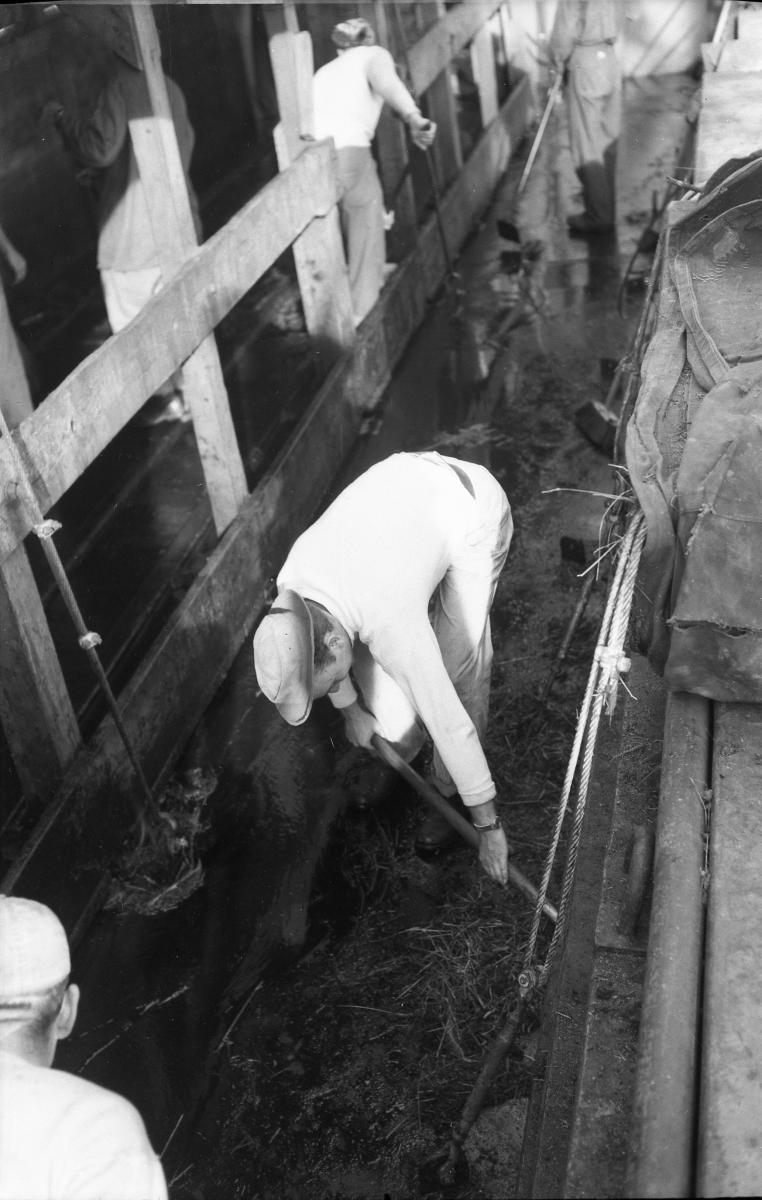 The partnership between BSC and the UNRRA ended when the UNRRA disbanded in 1947. But the momentum was there to allow for the Heifer Project to continue on its own and in 1953 it was incorporated as a non-profit organization and became

Heifer Project, Incorporated (HPI). Ben Bushong, the director of the Heifer Project at the time, refused to allow the ending of the partnership between BSC and the UNRRA to prevent the project from continuing. The German refugee issue provided the Heifer Project with a significant task. The Heifer Project (now Heifer International) has continued up to the present day and is known for having transcended politics and wars. When there were protests against sending heifers to the Soviet Union during the Cold War by some board members, Dan West stated that “a cow cannot distinguish between the hungry cries of a capitalist baby and a communist baby.” This project proceeded despite concerns that it would alienate supporters and 52 heifers and 3 bulls were shipped to Odessa. (Passing on the Gift; Kreider, pp. 132-44)

Since the beginning of the Heifer Project, nearly 15.5 million families in 125 different countries have been helped by the organization. The animals that are shipped now include heifers, horses, and chicks as well as pigs, bees, llamas, and water buffalo. The emphasis placed on the principle of “passing on the gift” requires families to pass on new-born livestock as well as their new knowledge to other families in need. Heifer Project now provides more than just cows such as microcredit loans to help start-up businesses and hand-pumped wells to provide communities with clean water. (“History in the Making”; Kreider, p. 145)

For a more complete biography of Dan West see: Yoder, Glee. Passing on the Gift: The Story of Dan West. U.S.A.: Brethren Press, 1978.

For more on the Seagoing Cowboys see: www.seagoingcowboys.com

See www.heifer.org for more information on the Heifer Project and the work they do today