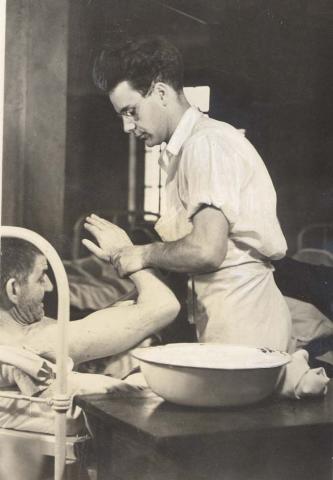 Scenes of squalor and decay were all too common in US mental institutions during the 1940s. Albert Q. Maisel’s “Bedlam 1946” in a May 1946 issue of Life brought to national attention such shocking conditions as shortages in staff and supplies, overcrowding, poor sanitation, and patient abuse.

CPS men and women entered into these situations, alleviating the severe labor problem in 43 mental hospitals and 16 training schools across the country (see Descriptions of Mental Hospitals from Outside Sources).

In many cases dismayed by what they witnessed, these workers resolved to do better (see Worker Descriptions of/Reactions to Mental Health Work). Their beliefs encouraged them to approach their patients not merely as “inmates” but as human beings deserving of love and respect. As a result, many CPS workers consciously chose to eschew violent or abusive treatment and to ameliorate unsatisfactory conditions within the confines of their service role (see Worker Suggestions for/Attempts at Improvement or Reform). Although they encountered occasional opposition, their dependable work and efforts on behalf of the patients often earned praise from their supervisors (see Relations with Administration or Staff). 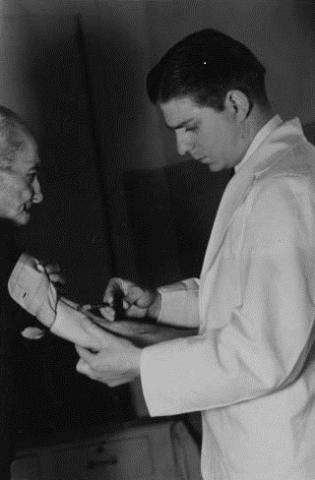 Al Benglen attending to a patient

Aside from individual behavior, a number of units worked collectively to fill gaps in the public understanding. Workers in the unit at the Connecticut State Hospital, for example, formed a public relations department which used radio dramas and newspaper features to better explain mental illness. Many CPS workers further helped to publicly expose poor conditions by documenting their experiences and sharing this information via articles such as Maisel’s “Bedlam.” Some workers also testified in court cases towards the removal of negligent supervisors or abusive employees and the guarantee of reform (see Investigations, Court Cases, etc.), the most notable of these cases involving Cleveland State Hospital.

Through these varied methods, CPS workers managed to either implement much-needed changes or at least draw attention to issues that would later be more fully addressed.

Sareyan, Alex. The Turning Point: How Persons of Conscience Brought About Major Change in the Care of America’s Mentally Ill. Scottdale: Herald Press, 1994.