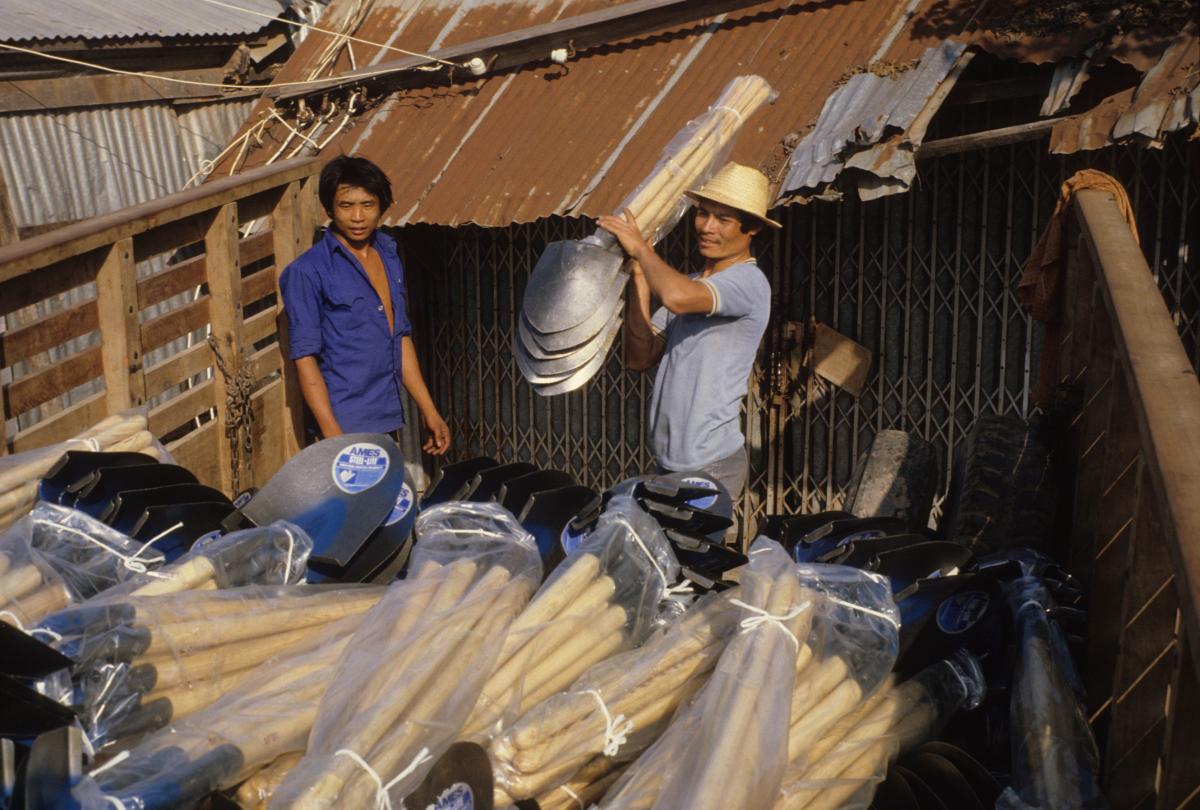 At the time of the first AFSC/MCC delegation to Xieng Khouang in November 1977, AFSC representatives suggested that using pitchforks or shovels might be a safer alternative to the traditional Lao hoe which is swung over the head when hand tilling the soil and which strikes the ground with a heavy impact. AFSC followed this up with a delivery of 80 pitchforks and shovels.

During a visit the next year, province officials responded positively, reporting that farmers found the shovels to be an effective alternative to hoes. They requested AFSC/MCC assistance in providing additional shovels. Upon reaching  an agreement with central authorities in 1980, AFSC purchased and sent 620 U.S.-made shovels to Xieng Khouang in early 1981 at a cost of $4,305. AFSC received $600 of Ocean Freight Reimbursement from USAID for this shipment—possibly the only U.S. governmental aid given for UXO work in Laos between 1975 and 1991. These shovels, made by the Ames Tool Company in Parkersburg, West Virginia, were distributed widely in the province—but still reached only a small percentage of farming families in affected areas.

Based on the very positive response that was received from Lao villagers and officials, MCC and AFSC decided to make a major commitment to the shovels program. This would include both the provision of large numbers of shovels to affected villagers and public  education and fundraising efforts in the United States.  A number of other agencies contributed to the 1982 shovel purchase including Oxfam America, the Christopher Reynolds Foundation, and Kvekerhjelp, the Norwegian Quaker agency. NORAD, the  Norwegian Agency for International Development, provided co-funding for Kvekerhjelp. The Canadian Friends Service Committee, with co-funding from the Reconstruction and Rehabilitation Fund of the Canadian International Development Agency, made a separate  purchase of 700 shovels. MCC funds purchased 1,200 shovels and another private donor an additional 600 shovels. This added up to a total of 12,600 shovels which were sent from the U.S. to Laos in 1983.

New AFSC representatives to Laos, Wendy Batson and Bob  Eaton, negotiated with the Lao government on a distribution plan and later followed up by visiting the provinces where shovels were distributed. They found that distribution went very well and that the shovels were greatly appreciated. No bombie-related incidents were reported by people using the shovels. Individual contributions received for shovels by AFSC following former AFSC Lao representatives Roger Rumpf and Jacqui Chagon’s speaking tour in the U.S. allowed for an additional 1984 purchase of 4000 shovels by AFSC which were all sent to Xieng Khouang and distributed to all districts of the province.

Source: Legacy of the Secret War: The Continuing Problem of Unexploded Ordnance in Xieng Khouang Province, Laos, and the Response of the Mennonite Central Committee and the American Friends Service Committee, 1972 - 1994.