In its first major attempt to show westerners the suffering and destruction of the war in Laos, the government invited 15 representatives of international organizations to visit Xieng Khouang province in northeastern Laos from November 16 through 19. Included in the delegation were representatives of the UNHCR, UNICEF, WHO, FAO, the international Red Cross, Save the Children Fund (U.K.), AFSC, MCC and a journalist from the Far Eastern Economic Review. The representatives of AFSC and MCC were the first Americans to visit Xieng Khouang since it was “liberated” in 1970. Traveling more than 200 kilometers by road, the delegation visited the town of Phong Savan ( the new provincial capital), Muang Pek District ( the Plain of Jars), the town of Xieng Khouang ( 30 kilometers southeast of Phong Savan), and Muang Kham District ( 60 kilometers northeast of the provincial capital).

Before the war, 42 year world Chit Kham his wife and 3 daughters farmed a hectare of land in Ban Na Mun, not far from the Muang Kham district headquarters. Their family wasn’t as well –off as some of the other 42 families in the village, but they always managed to find enough to eat. Then just before Christmas, 1964, Chit Kham told us, American T-28s began strafing his village. Gradually the firepower was stepped up in an attempt to force the villagers to move to areas controlled by the “Vientiane-side”. Eventually two-thirds of the district’s population moved to Long Chieng and Vientiane province; the others clung to their land living in caves on the mountains and trenches in the forest. They worked their paddy fields at night by moonlight. 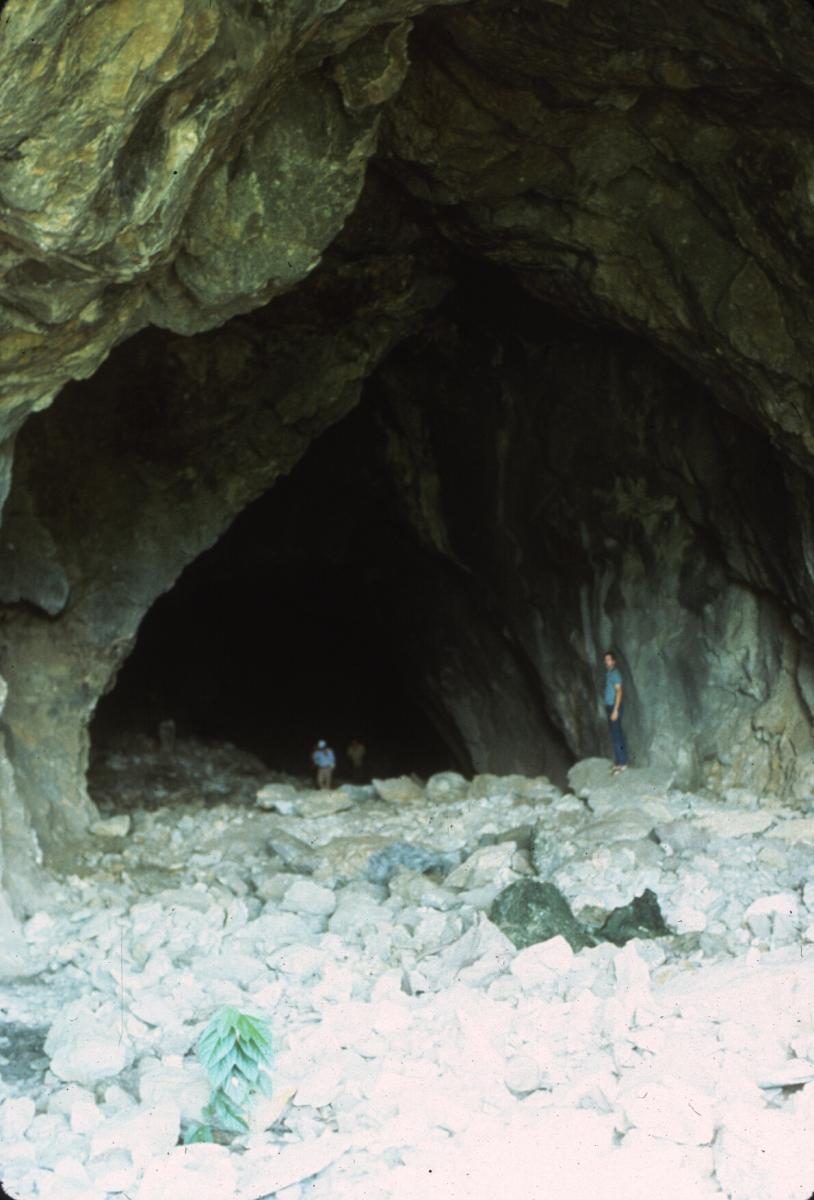 During a concerted air attack in the winter of 1968, the women and the children of the village sought refuge in the district hospital in the Tam Phou cave. Almost without emotion Chit Kham described how for two days F-105 planes rocketed the entrance before finally sticking the shelter killing all 137 occupants. For several days the cave was too hot for him to remove the bodies of his wife and young daughters. After losing his family and friends, Chit Kham abandoned his farm and joined the village militia. When asked by one of the Americans what the U.S. might do to win back the respect of the Lao, Chit Kham responded, “Help heal the wounds of war. So many lives were lost. We want those lives back which were lost”.

No one was untouched by the bombing. Everyone from provincial officials to the staff in the guesthouse had a story of personal loss and suffering. Mr. Yong Yia, the Lao Suong (Meo) vice-chairman of the province told us 8,083 civilians were killed, 3, 764 people maimed, 11, 345 children orphaned and 2,567 women widowed. Although only 50,000 are counted as refugees, virtually everyone in the province was displaced by the decade of war.

Approaching from the south in a C-123 transport plane over the rolling hills and green savannahs of the central plateau, we saw thousands of gaping bomb craters dotting the landscape. We counted 15 craters alone on the hill outside the newly constructed “December 2nd Hotel” in the heart of Phong Savan. In Xieng Khouang town, shells of several two-story buildings overgrown with brush and weeds stood along the main street betraying the previous prosperity of the former provincial capital. A tall, lonely Buddha stood amid the rubble of the former Wat Phya pagoda. According to province tabulations 353 villages were razed, 17, 742 houses, 1,761 Buddhist pagodas and 172 Christian churches destroyed during the bombing. 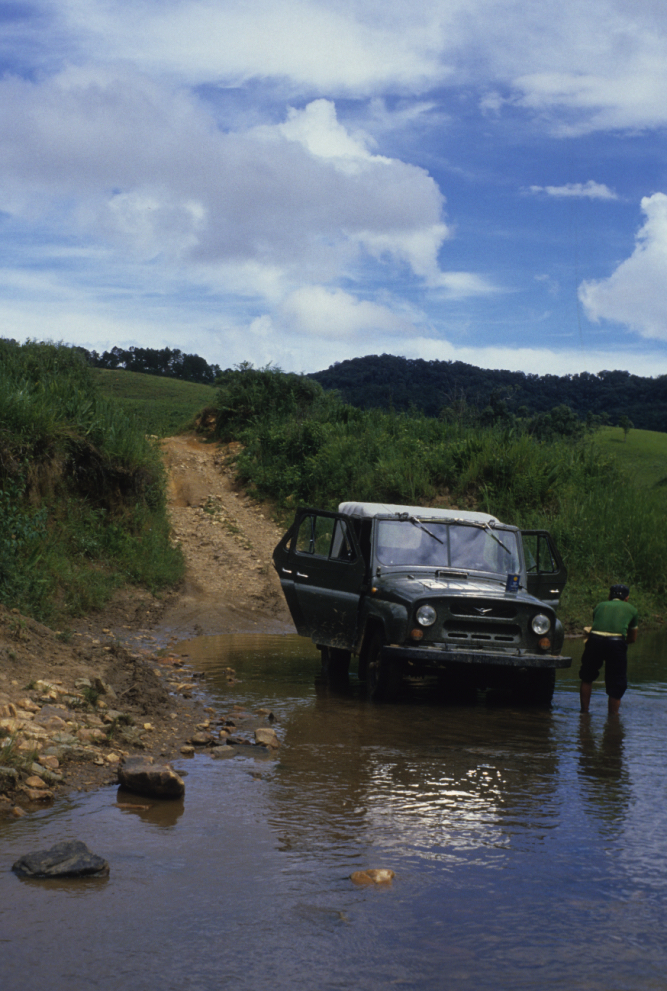 Travel today is slow and arduous even in a 4-wheel drive Chinese and Russians jeeps. The dirt roads are rutted and pot-holed. Not one bridge survived; our vehicles had to ford scores of rivers and streams. 30-foot craters, burned tree skeletons, empty bomb casings and a few rusting truck frames lined the roads. Fifteen years ago the kilometer trip from Phong Savan to the town of Xieng Khouang took half an hour by taxi; today it still takes 2 ½ hours for a jeep or transport truck to cover the distance. The province’s roads are virtually impassable during the annual 5- month monsoon rains.

Since 1973 the people of Xieng Khouang have returned from the mountains and forests to rebuild their shattered lives. 45,000 have returned from the refugee camps to the south since 1975, many with help from the UNHCR. Although a visitor sees much reconstruction activity, progress is slow due to the lack of materials and tools.

In the town of Xieng Khouang the villagers covered the ruins of a former Catholic church with a straw roof and converted it into a temporary district hospital. The town’s students study in the morning while completing their thatched school building in the afternoon. Teams worked on the roads and bridges of route 6 and 7 using mostly their hands for digging dirt and rattan baskets for carrying stones. Others were digging irrigation canals and clearing abandoned fields with a small hand tools.

30,000 people have returned to rebuild Phong Savan during the past 4 years. But still today the town’s dirt runway, small plywood government office and guesthouse, few dozen scattered straw-thatched and rough wooden houses, and a kilometer of paved road remind a visitor more of a small rural village than the provincial head-quarters. Fuel-driven generators provide electricity to the town for only three hours every night. 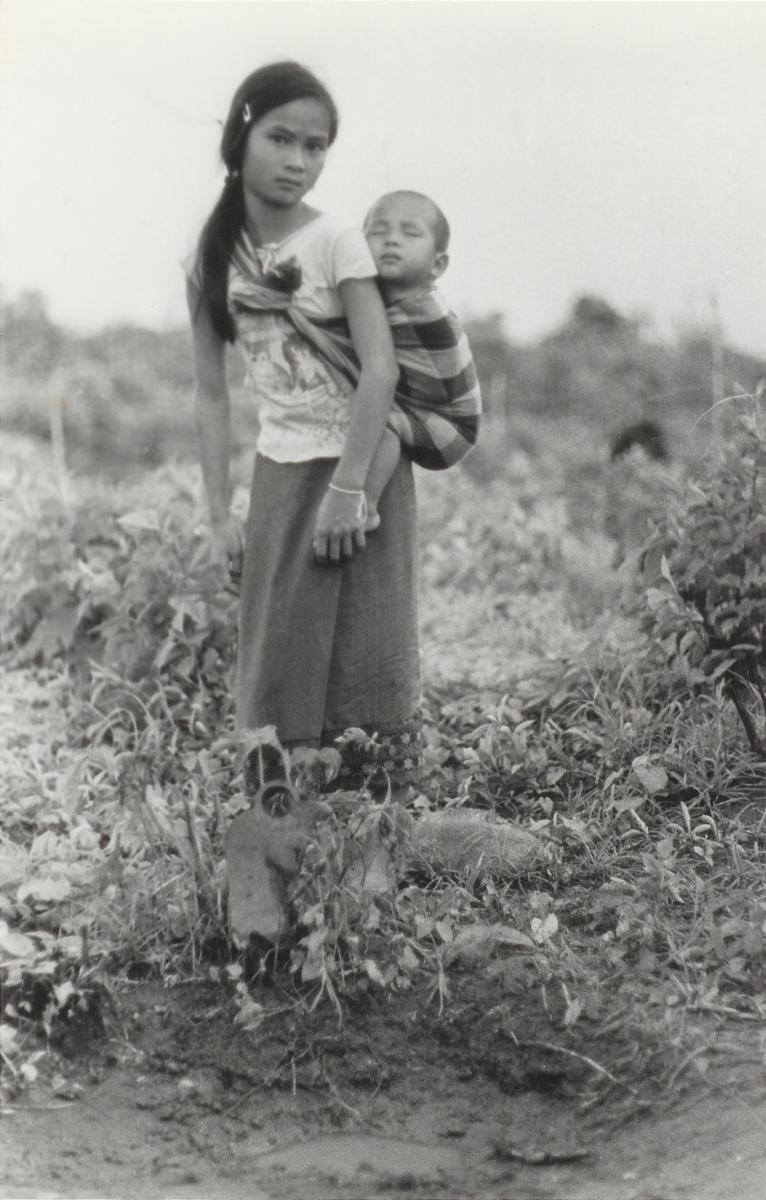 Unexploded ordnance is the number one problem facing Xieng Khouang’s population of 105,000 people today. Since 1973, 267 civilians have died and 343 been seriously injured from bombs and mines while attempting to reclaim their fields and construction sites. This year alone 17 people have been killed and 25 maimed.

The most numerous and dangerous munitions buried in the soil of the province are “guava bombs”, or what the Lao call “bombies”, which are scattered over a wide radius when a CBU-24B “mother bomb”, dropped from an airplane, opens just before impact. The tennis-ball size bomblets containing explosives and steel pellets detonate when struck by a farmer’s hoe or kicked by a passerby. Another weapon seriously hampering reconstruction is a small, green, and leaf-like mine dropped from an airplane which detonates less than 5 pounds of pressure resulting in the loss of a hand or foot. 92,500 hectares of the province’s land have yet to be cleared of unexploded ordnance.

Buon Pheng, a 40 year old civil servant, was gardening near the Muang Kham district headquarters on 21 October when his hoe struck a “bombie”. He was thrown several meters and received serious pellet wounds to his face, chest and arms. The students and teachers, who have been building classrooms and dormitories to house the new Muang Kham District secondary school, followed the bulldozer as it cleared the land gingerly gathering up the bomblets and placing them in a leaf-lined hole at a far corner of the school yard. Even now as the building nears completion, members of our delegation stumbled across previously undetected“bombies.”

Besides unexploded munitions, the problems facing the people of Xieng Khouang today are the lack of draught animals and farming tools, ruined fields and collapsed irrigation systems. According to province estimated 1, 445,00 hectares of forests, 148, 834 hectares of industrial crops (cotton, coffee, tea) and 1, 288 hectares of rice paddies were destroyed by the bombing. Another 64, 529 beef cattle, 17, 553 horses and 87, 161 pigs died in the 5 year onslaught. 50,676 of the province’s water buffalo were killed. Lacking draught animals, groups of 6 to 8 peasants in some areas harness themselves in front of buffalo plows to till their fields. (We saw only two tractors during our stay).